This year, when we turned our attention towards our annual Christmas Party, this came against the backdrop of an exceptionally busy year. Our team have been tested by the departure of three fabulous team members and everyone had worked incredibly hard maintaining our usual high-standards whilst we set about recruiting their replacements.

When we asked our team where they would like to celebrate their Christmas Party they asked whether they could have this year’s celebration at the home of ‘Mr and Mrs Dentist’. We simply couldn’t refuse! The creature comforts of a Christmas-at-Home gathering would be ideal for allowing everyone to enjoy each other’s company, especially those that work part-time hours and only meet their opposite numbers infrequently, or in passing. 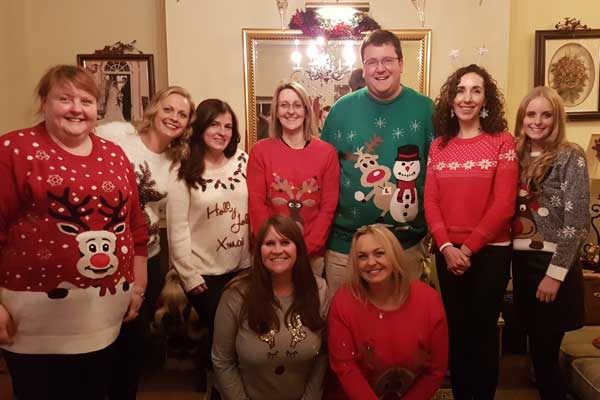 In addition to hosting the party, Mr and Mrs Dentist took on the catering and also booked Damian Surr, a ‘close up’ magician, as a surprise.

Damian’s close-up magic was amazing and none of us could figure out how he did it, no matter how beadily we followed with our eyes.

A few moments from his routine really stand out in the memory. There was one moment where he gave Rebecca a pack of cards and asked her to hold it tightly between her palms. When Rebecca opened her grip the carefully clutched cards had somehow been transformed into a block of perspex!
Lorna was asked to sign a card which vanished from the pack only to later be recovered from deep within a block of ice!

Ashley’s children were amazed when he invited them to take one of his A5 leaflets from his wallet.  With a flick, the leaflet apparently turned into cash- a bundle of £20 notes – with a flick he turned it back into a leaflet again and returned it to his wallet.

If you ever find yourself looking for something similar – Damian Surr is the artist and can be found working as Ginger Magic – we can assure you he comes highly recommended!

You can discover more aout our special guest performer at gingermagic.com