We proudly joined the Balsall Common Festival team this year as Event Partners, where we hired a 6-metre Climbing Wall for the day, the proceeds from which went to the Festival pot for distribution to worthy local causes. 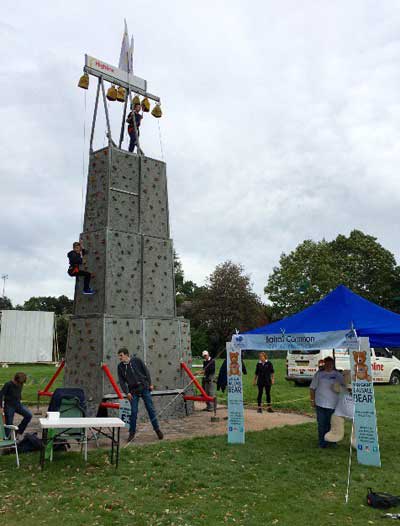 We had such a great day at the family-friendly event on Saturday 24th September, where we helped staff the climbing wall attraction and also ran our Prize Draw to find our friend, Balsall Bear, a new home.

This year’s event – which attracted approximately 6000 visitors – was run by volunteers with the aim of bringing the entire local community together. It was jam-packed with live music, leisure and entertainments, with a main stage plus separate music tent, a separate display arena for activities such as dance and martial arts, plus street food and plenty more for people of all ages to see and do. If you haven’t attended this event before this could be one to add to your calendar for 2017.

We are delighted to report that our climbing wall returned £562 in proceeds which we passed to the Festival pot for distribution to local causes. We’re looking forward to hearing announcements regarding the beneficiaries from this year’s event.

Our Day Out at the 2016 Balsall Common Festival

Saturday 24th September began for us early in the morning as we headed down to ‘The Lant’ on Saturday morning to set up our marquee and meet the team from Highline, our climbing wall providers.

The gates opened at 12:30pm and it wasn’t long before we had enthusiastic climbers crawling all over our 6-lane wall. And whilst the grown ups clambered up the edifice, we kept the little ones occupied thanks to a a baby-bouldering section we provided free of charge.

We met lots of people throughout the day including business owners that had contributed to the Festival’s success, such as the Main Weekend Partners at Simon Burt the Estate Agent.

We also met the folk from The Hampton Gym, The Mayor of Solihull, as well as all the people keen to offer Balsall Bear a new home as part of our prize draw. 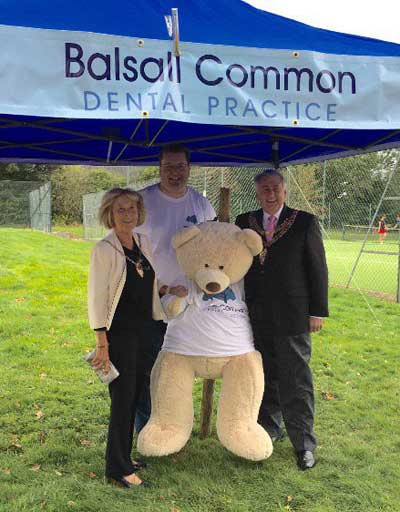 Festival Day was always going to be emotional for members of our team as we prepared to say goodbye to Balsall Bear, a long-standing member of the ‘Balsall Dental’ family. Having realised it was time for him to spread his wings, we decided Festival day would be the right time to set him free.

From small beginnings as a tiny tot, we have all watched him grow into the grown-up he is today, with a catalogue of adventures under his belt he’s already lived a fulfilling life. Discover his story in:

The Life and Times of Balsall Bear