A Dental Nurse, a Boyfriend a Bear and a Plane 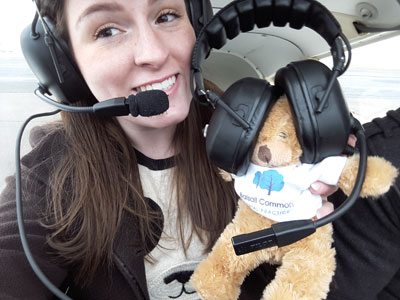 Our Dental Nurse Kimberley Millington took a flight of fancy, as she took an eye-opening trip to France, when she hired a plane with her boyfriend, with the pair of them stowing our good friend Balsall Bear away on board too!

Kim and her boyfriend – who is currently in the process of qualifying as a commercial airline pilot – used his requirement to rack up qualifying air miles to dream-up a slick and sneaky sightseeing daytrip to France:

Kim’s boyfriend achieved his Private Pilots Licence (PPL) within about a year, before embarking on his longer term aim of acquiring a commercial license.

“Dealing with Air Traffic Control can be interesting.” says Kim alluding to some interesting experiences, with a knowing nod, although we didn’t dare press for incriminating details!

“We hire our own plane and have to file our flight plan with the Civil Aviation Authority”, a task which Kim enjoys, as well as assisting with flight navigation.

“We fly out of Coventry normally and we always have to get there half an hour before we do anything.”

“We flew into Le Touquet, a forest town in the Northwest of France”, explains Kim as she described the resort town, famous for its architecture and described by some as the playground of rich Parisians.

“We landed in France and the people were really nice.”

“It was absolutely lovely.  I was chatting to the staff on the desk at the Airport, in French whilst they replied in English!”

Well, at least this proved they understood what she was saying!

When Kim is on terra ferma, she can often be found here at Balsall Common Dental Practice, looking after our wonderful customers.